Why the term ‘digital native’ does not compute in Scottish classrooms

The following Editorial appeared in The Herald on Thursday 27 May 2021 as part of their ongoing series about the Future of Education.

Although today’s young people are often thought to be naturals when it comes to technology, Digital Xtra Fund believes such thinking undermines the pressing need for more Scottish pupils to take an interest in computing science. By Andrew Collier

TECHNOLOGY is ubiquitous: it surrounds us to the point where we use it intuitively and virtually without noticing. We ask it to do remarkable things and it complies, usually immediately and uncomplainingly.

That’s both a blessing and a curse. Computers and IT are simultaneously our best friend and an inhibitor to our advancement. We know things will happen when we click an app without ever really thinking about how it works or remembering that skilled people have worked to create and polish that app.

This creates an assumption and an entitlement that acts as a barrier to learning when it comes to learning computer science. If youngsters in particular grow up with technology all around them, the thinking goes, then why should they feel the need to build that technology themselves?

Today’s children are generally (and erroneously) regarded as what are known as ‘digital natives’ – young people who have grown up with computers and the internet as an integral part of their lives and as such, they are all comfortable and confident using these things.

But the challenge is getting them to realise that if they don’t develop a consciousness and a curiosity about the technology in their hands, it’s hard to convince them that they should consider a career in the science underlying it.

To put it another way, if someone is having a smooth ride in a modern car, they really don’t need to think about what is happening underneath the bonnet in the engine compartment. There’s an assumption because modern vehicles are so comfortable and reliable, we really no longer need mechanics. Until, of course, the car breaks down.

When applied to computer science, this assumptive ethos is of concern to educators and in particular to Digital Xtra Fund, a Scotland-wide charity working to build interest in computing and technology among those aged 16 and under through extracurricular activities.

Kraig Brown, the Fund’s Partnerships and Development Manager, believes this attitude is creating problems when it comes to getting students engaged in programmes such as the ones supported by his own organisation and others such as dressCode, which works to inspire Scottish girls to learn computing.

“The term ‘digital native’ implies that computer users don’t need to take computing science. It also assumes that they will automatically have the skills they need to enter the sort of tech-centric careers we are trying to encourage students into.

“That might be the case for a minority, but it certainly isn’t for a majority. In fact, the phrase ‘digital native’ diminishes the work that we do by suggesting the programmes we support for young people aren’t really needed.”

He adds: “They can go through school thinking that all they need to do is pick up an iPad and they can find everything they need on the internet.

“But when they get beyond school and into university or an apprenticeship, they find they do need some computer science skills for a lot of careers in the world today – and not just tech-based roles. Once they realise they don’t have the necessary skills to get into many job markets, what do they do then? They can reskill or upskill but it’s much easier if we instil these computing skills earlier.” 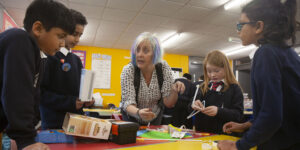 Kraig makes the point that previous generations using popular early domestic computers such as the Commodore 64 or BBC Micro generally had to learn something about programming.

“You had to know about computational thinking just to use them! Modern computers have eliminated that need. That’s good in many ways, it makes technology more accessible, but it also means many modern users don’t have those skills anymore.”

The declining numbers of computer science teachers in Scottish schools over the last 15 years hasn’t helped the situation. Even in 2021, computer science is not taught in every secondary school.

In the Highlands alone – an area nearly the size of Belgium – there are nine full-time Computer Science teachers covering 29 secondary schools. “I think most senior leadership teams in schools appreciate how important the subject is by now, but because many don’t have the staff or resources, they can’t be as proactive in promoting the subject or getting their students as involved as they would like.”

Last year’s Logan Review into education produced for the Scottish Government recommended that computer science should be treated as a core subject such as maths and physics.

Kraig supports this, though he concedes the shortage of computing teachers will be an issue. “The challenges with computer science at the secondary level is negatively impacting a lot of young people in Scotland, even if they don’t know it yet. I believe one solution is to aggressively upskill our primary teachers and introduce computing skills at an earlier stage to give them the foundational skills they need as well as excite them about the possibilities of tech.” 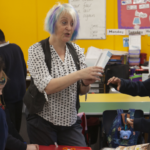 Recruiting more computer science teachers or introducing these skills earlier won’t help if there isn’t uptake from young people in secondary and beyond. How can the question of exciting students about building computing skills be successfully addressed? He believes the learning must be directly connected to real life.

“In my opinion, the best way is to get industry involved – ideally young experts or professionals, but really anyone who can talk about their career, the skills they use, and how technology impacts this. So much of what we do in daily life is based on technology and the pandemic has only amplified this. It has also highlighted the growing importance of having technology and connectivity in place for all.”

Many people born before 1980 have recently learned new digital skills as a matter of necessity. Kraig believes that the same kind of urgency and thinking is now required to inspire today’s generation of young people to take the next steps to become digital creators and digital leaders, not simply ‘digital natives’.