The following post was written by Cheryl Peebles and originally posted in The Courier.

Traditionally girls have been less likely than boys to go into careers in science, technology, engineering and mathematics. But that’s a trend that one Kirriemuir school is helping to reverse by challenging the stereotype that girls don’t engage well with STEM subjects.

Southmuir Primary School has a STEM club exclusively for girls, which provides fun activities such as coding and robotics.

Teacher Karen-Ruth Phillips started the weekly club for P4 to P7s to allow girls to enjoy coding and STEM subjects in a creative way.

With grant-funding the school bought new robots and equipment and there has been great interest.

Karen-Ruth said: “Global current research points out that if we want to increase the level of female participation in computer science at secondary school level and beyond, we need to address it within the primary school setting. 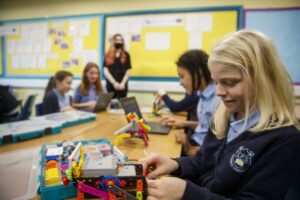 “There have been many studies which suggest that girls may be more motivated by projects where the aims were more people-focused and targeted towards their interests.

“So we chose activities with a creative element, whilst still covering the basic skills and regularly monitored engagement.

“We did this by asking the girls to indicate their enjoyment level after each block of activities we completed over the year.”

Activities girls liked most included making a virtual pet and a dance party where they coded characters to complete routines.

They even held a Strictly Come Dashing competition, where they coded dances for Dash and Dot robots and guests voted for their favourites.

Karen-Ruth said: “These creative approaches to the use of the robots encouraged the girls to persist in progressing through the Dash and Dot structured puzzle challenges.”

Girls earned digital badges and certificates and were given insights into potential future careers from women like games creator Laura Molnar, of 4J Studios, and cyber security consultant Kayleigh Gall, of CGI Glasgow.

What do the girls say? 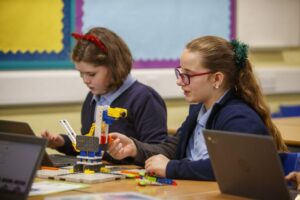 Carly, 9, said: “I liked coding the Dash robots because they made me laugh. I loved doing the dance competition.”

Stacey, 9, said: “Some parts of the Code.org course were hard but I was determined to finish it. I enjoyed building and coding the VEX GO robots the most.”

Eve, 10, said: “Making the VEX GO robots, especially the Hexbug animals, was the best bit. I liked the way they moved.”

Erin, 8, said: “I enjoyed designing a coin flipping robot with our micro:bits. I would like to become a robotics engineer.”

Mya, 11, said: “The talks have made me consider a career as a games designer.”

The start of a STEM career?

Karen-Ruth said: “It has really ignited interest in the girls and opened their eyes to a whole new way of working. 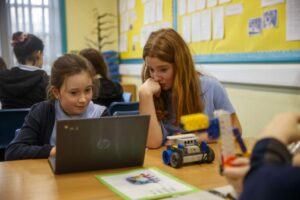 “A survey that I conducted found that more than two-thirds of the girls would now consider a career in STEM, with 13% saying they definitely would do so.

“The girls themselves feel that the project has helped them develop their team work and resilience and has given them more confidence.

“What’s especially pleasing is to see them learn and get excited about coding, their enthusiasm has been a joy to watch.”

The club launch received a £5,000 grant from the Digital Xtra Fund, supported by IT and business consulting service CGI.

Kraig Brown, the charity’s partnerships and development manager, said: “Our goal is for young people to have access to innovative and digitally creative activities, regardless of their gender, background, or where they live, and this has been encapsulated perfectly by Southmuir.”