The following Editorial appeared in The Herald on Wednesday 21 April 2021 as part of their ongoing series about the Future of Education.

WITH new financial input from a prominent Scottish tech investment company, Digital Xtra Fund’s annual awards will be boosted considerably this year – support which has also opened up a new job opportunity within the charity. By Andrew Collier

Scotland may be a relatively small country, but it has a real opportunity to be a global leader in the digital economy. We have the drive, the knowledge, the skills and also  the ambition.

One area where we could improve, however, is education. Specifically, our young people need to become enthused by, and engaged with, the various opportunities technology offers.

If they see exciting and worthwhile careers are available in tech and go on to fulfil these roles, it will build the critical talent pool required.

Digital Xtra Fund is targeting exactly this goal. A Scotland-wide charity, it is increasing interest in computing and technology among those aged 16 and under by supporting extracurricular tech activities that inspire young people to follow this path.

The Fund has been highly successful and continues to grow. It is winning new financial support and expanding its ambitions further to the point where it is now seriously contemplating a future where there is a tech club in every school or community in the country. “We have new partnerships in place and a new role within the Fund”, says Kraig Brown, the Fund’s Partnerships and Development Manager. “It’s all very positive.”

In a major boost, the Fund has most recently partnered with new Scottish tech investment company Chroma Ventures, which has donated £25,000. This means when the Fund’s annual grants are announced in June, it will award £100,000 rather than the £75,000 originally announced.

The charity is also hiring a Community and Grants Officer to help take it to the next level. This person will focus on fostering collaboration between industry and grant recipients.

They will also help those receiving financial awards to understand concepts such as ethics in technology, how to use tech as a force for good, as well as the importance of meta-skills – skills to create, collaborate and empathise with others – alongside technical skills. Kraig Brown says the new role is part of a wider strategy to help industry enthuse youngsters about tech and develop their understanding of the digital world.

“We want to get more professionals in front of young people talking about their careers. If young people can connect what they’re learning to these jobs, it will help exponentially long-term.” 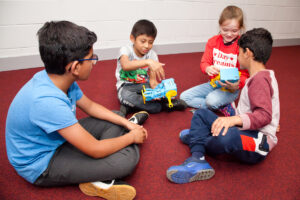 One example he gives occurred during a recent online session he attended at Heart of Midlothian FC’s Innovation Centre, a community-based initiative offering courses to help participants learn digital skills.

“There was a User Experience Designer from Sky who was giving participants some really useful feedback on things like how their app’s buttons could stand out better and where the back button should be to make it more intuitive.

“I think these types of interactions are hugely valuable because it relates the learning to ‘real life’ while also informing young people what a UX Designer does. This doesn’t happen enough, but this new role will encourage and facilitate more of these interactions and share examples of best practice.”

Kraig is also delighted with the additional funding provided by Chroma Ventures.

“It made an immediate impact. It means we can now disburse £100,000 this year – that’s fantastic. It also puts us back on track with where we were pre-Covid; I’m proud of that too.”

This increased confidence is enabling the Fund to think more about how Scotland can become a global tech leader. Kraig would like Digital Xtra Fund to lead on developing a network of ‘Techspaces’ for every school or community across the country. Modelled after Makerspaces – these would be informal learning spaces designed and dedicated to giving young people the opportunity to get creative with tech.

“They would be fun, safe spaces where children and young people could get hands-on and learn about tech. They could discover and explore at their own pace while trying out various coding platforms or kit. The learning is informal, but educators and volunteers would provide lessons and structure just like all the other extracurricular activities we support. However, there isn’t the stress of a test or essay at the end which puts a lot of young people off trying computing when they get to Secondary.”

“Techspaces would also operate outwith the curriculum meaning they would be flexible and could more easily involve industry volunteers. Non-curriculum programmes such as ‘do your:bit’ from the Micro:bit Educational Foundation, iDEA Badges, or Apps for Good – which are proven to engage young people – could be easily incorporated as there’d be no set curriculum. This would give participants opportunities to try new things and essentially play around without a fear of failure.”

This approach addresses several of the challenges facing Computer Science in schools. “First and foremost, there aren’t enough Computer Science teachers in Secondary Schools and the ones who are in place have to keep an eye on the curriculum.

“At the Primary level, teachers are already often at capacity so asking them to include more during class time isn’t always viable, not to mention the training involved. Even if we overcame this, many schools don’t have the kit or budget and even if they do, it is often restricted by firewalls set by the Council.”

“We need make the idea of playing with technology exciting and not stressful. This could be done in the classroom – there are some brilliant examples of this across Scotland – but there are many challenges doing it that way and we need to start winning young people over more quickly.”

Kraig is under no illusions the magnitude of this vision. With 2,476 schools in Scotland, it would require significant investment. However, he does not believe this all should come from the Government either.

“Digital Xtra Fund has successfully brought industry and Government together to award £660,000 over the past five years. Yes, education is ultimately the responsibility of the Government, but it is industry that needs this to happen and will directly benefit from an increased talent pool. As such, we need to work together. I believe this is the easiest and quickest way to create a generation of inventors and innovators to make Scotland a global leader in the digital economy.” 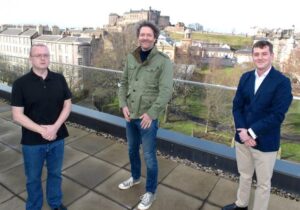 THERE is no doubt that the Digital Xtra Fund’s vision of digital learning is a highly challenging and ambitious one. But Kraig Brown believes in thinking big. His mantra is that if there is a will, there is a way.

Bringing Chroma Ventures on board is undoubtedly a big step forward. The company was established in Scotland earlier this year by entrepreneurs Paddy Burns and Chris van der Kuyl.

It shares the Fund’s ethos that inspiring young people to understand and to create with technology is essential to the future well-being of Scotland.

The donation is one of the biggest the charity has received to this date.

As part of the company’s new commitment to the Fund its Principal Paddy Burns, who is also Chief Executive of 4J Studios, will now join as a Trustee, bringing new thinking and strengthening the charity’s entrepreneurial credentials.

Kraig Brown says that he is delighted about the tie-up. “Like many charities, 2020 was full of uncertainty for us.

“This support from Chroma Ventures has enabled us to continue supporting educators and young people at the same level as previous years. At a time when many in the third sector are struggling, this is important as it builds confidence among our grant recipients, stakeholders and other industry partners that we will consistently support talent in Scotland’s tech sector.”

And Paddy Burns comments: “Technology is a thread that runs through my own back story and the sort of initiatives delivered by Digital Xtra Fund resonated strongly. I firmly believe that improving digital skills throughout Scotland can lead to life changing opportunities for young people across the country.”

Digital Xtra Fund has received a donation of £25,000 from Chroma Ventures to support its annual grants programme. This investment will enable the Fund to now award up to £100,000 in June instead of the £75,000 announced in February.

Launched in 2016, the Fund provides grants to schools and organisations to boost interest in computing and technology among young people aged 16 years and under. Grants up to £5,000 are awarded to innovative, exciting extracurricular activities that engage young people and teach skills such as coding, data science or cyber security as well as creativity and resilience. Since its inception, the Fund has awarded £660,000 to 80 initiatives around Scotland and helped engage over 38,000 young people in technology.

Chroma Ventures is the newly-established investment arm of 4J Studios, the multiple award-winning games developer best known for developing Minecraft for Microsoft, Sony and Nintendo games consoles. 4J Studios’ ethos combines innovation, creativity and technical excellence, which aligns with Digital Xtra Fund’s belief that that inspiring young people to understand and create with technology is essential to the future wellbeing of Scotland.

Chroma Ventures’ involvement as a Gigabyte Partner will help enable these digital skills activities and initiatives for young people across the country. The donation is one of the largest the charity has received to date.

Paddy Burns, Principal at Chroma Ventures and CEO of 4J Studios will also join Digital Xtra Fund as a Trustee as part of the company’s commitment to the charity.  As well as experience of directly investing in exceptional individuals and teams, he brings an entrepreneurial approach to developing innovative ideas and technology. 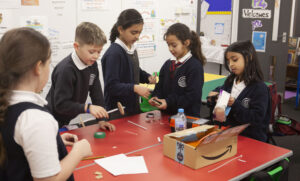 Kraig Brown, Partnerships & Development Manager at Digital Xtra Fund, said: “Like many charities, 2020 was full of uncertainties for the Fund but Chroma Ventures’ support has enabled us to continue supporting educators and young people at the same level as previous years. At a time when many in the third sector are struggling, this is important as it builds confidence amongst our grant recipients, stakeholders and other industry partners that Digital Xtra Fund will consistently support young talent in Scotland’s tech sector. We’re delighted we’ll be able to continue our work and help inspire more young people in Scotland to pursue a career in tech. With ambitious plans, we also hope Chroma Ventures’ involvement will raise awareness and encourage further interest and support in our grants programme.”

Paddy Burns said: “Technology is a thread that runs through my own back story and the sort of initiatives delivered by Digital Xtra Fund resonated strongly. I firmly believe improving digital skills in Scotland can lead to life-changing opportunities for young people across the country, and that’s why our support for this initiative felt like a natural fit.

“I benefited from the support of experienced entrepreneurs and investors when I was starting out more than 20 years ago, and it’s fantastic to be able to give something back to a sector that is very close to my heart.”

4J Studios is a video game development studio established in 2005, based in Scotland, with offices in East Linton and Dundee. With an extremely experienced core team of designers, technology & games programmers and artists, the company’s ethos is to combine innovation, creativity and technical excellence with efficient production practices. 4J Studios is best known for developing Minecraft for Microsoft, Sony and Nintendo games consoles.